It was the end of the road for Soma and Miyonse as both housemates were voted out of the Big Brother Naija house on Sunday, 5 February.

At the live eviction show on Sunday night, host Ebuka Obi-Uchendu said two of the three nominated housemates would be evicted that night.  He then asked the three housemates who were up for eviction – Efe, Soma and Miyonse – to leave the House one after the other amidst tears and shock from the other housemates. However unknown to the other housemates, the evicted trio would be sent to the arena from then on two would be asked to leave while one would return into the house. Emotions ran high as each of the housemates bade them farewell as they exited the house. 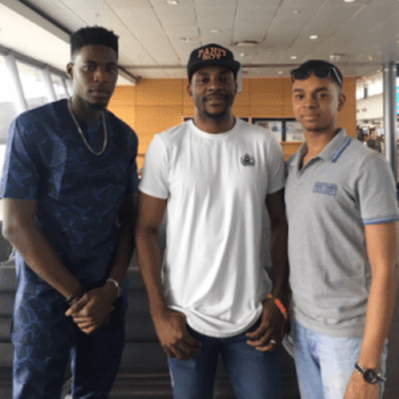 After a long wait in the arena, Ebuka announced Soma as the first evictee of the Big Brother Naija competition. A visibly sad and upset Soma was ushered to the stage were the highlights of his stay in the house played out. He admitted to have enjoyed his intimate moments with Gifty and said he kept it real in his short stay in the house.

Meanwhile, the tension in the arena was palpable as Efe and Miyonse waited to know their fates. Ebuka then called Miyonse as the second evictee from the house, automatically securing Efe’s stay in the competition.  Miyonse who had previously survived the first mock eviction had reality dawn on him when he finally departed the house for good. In his chat with Ebuka he said he had no ill feelings toward any of the housemates as he knew it was a game. When Ebuka told him his ‘cuddle buddy’, TBoss, nominated him he said he was not surprised but disappointed.

With Soma and Miyonse officially out of the Big Brother Naija house, Biggie let the other housemates into the arena to reunite with Efe. It was then the reality of the eviction set in for the housemates. A visibly grief stricken TBoss still held on to a fleeting hope that Miyonse would be asked to return, however, that was not going to be the case.

With two housemates out of the house, nominations for the second evictions will commence Monday night. The housemates have come to the realization that it is game that has to be played strategically in their quest for the grand prize. The next eviction show holds on Sunday, 13 February.

The show is aired 24/7 in 45 countries from Nigeria through East, West and Southern Africa on DStv channel 198 and GOtv channel 29.

All the action can also be followed on Big Brother Naija social media fan pages with the hashtag #BBNaija on Twitter @BBNaija, Instagram @BigBrotherNaija2017 and Facebook www.facebook.com/bigbrothernaija

Uganda among the 17 countries where expats live the happiest lives

‘Will You Marry Me Pretty Katende’