Mountain Dew on Wednesday launched an engaging and exciting countrywide tour dubbed, “Mountain Dew Xtreme Tour”, to tighten its connection with its customers in Uganda. 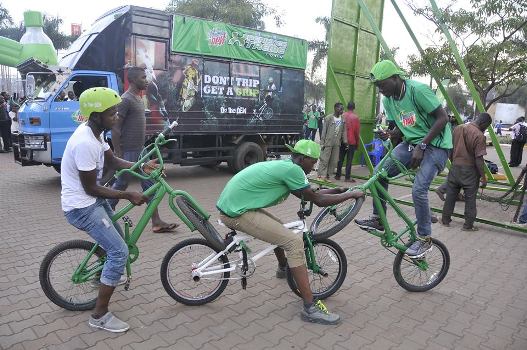 The Shs500-million tour will run from September to October in major towns across the country, according to Mr Innocent Tibayeita, the head of sales and marketing at Crown Beverages Limited. “The annual tour, which brings out the brand extreme personality, is aimed at inspiring youth in Uganda to be bold, daring and different and to live their lives to the fullest. It encourages them to go out there and grab all the excitement and adventure the world has to offer,” Mr Tibayeita said. [adrotate banner=”3″]

“It will also double as one of the channels we shall be using to showcase and sample our customers with our new pack, Grip. The bottle exudes elements of activity, adventure, and fun. In a nutshell, the Mountain Dew Grip bottle feels great in people’s hands and I am confident our consumers will love holding it, and love drinking from it during the tour,” he added. The 330ml plastic bottle costs Shs1,200 and the 500ml pack at Shs1,700.

Mountain Dew, which was launched onto the Ugandan market seven years ago, has been running the tour for the past couple of years and it has helped the brand to gain market share. It is now the third market leader brand in Uganda. Motocross, an adrenaline-charging sport, and video-gaming; two of the global Mountain Dew platforms that the brand has developed in the last six years, in addition to wall climbing, skateboarding, powerising, among others, will be used as the flagship activities of the tour. The tour, which will also have bashes, will cover Hoima, Masindi, Arua, Lira, Masaka, Fort Portal, Mbarara, Soroti, Jinja, Mbale, Bushenyi, Gulu, among other towns.

Standard Chartered Bank in partnership with Challenges Worldwide scale up the...