A stunning model has claimed Cristiano Ronaldo sent her sexy secret messages asking to “bite her bum” if he scored a goal. Venezuelan beauty Alexandra Mendez has revealed steamy WhatsApps from the Portuguese hunk on live TV.

In the private messages, the 34-year-old superstar appears to have asked for her number over Instagram. The Juventus ace then sent her selfies of himself, before making a bet with the model.

He allegedly had a wager with Mendez that if he netted at the match she was at, he could “bite her bum”.

She told Peruvian TV channel ATV that nothing ever happened between the pair, despite meeting face-to-face.

The steamy messages have only just come to light, but are understood to have been sent three-years-ago. 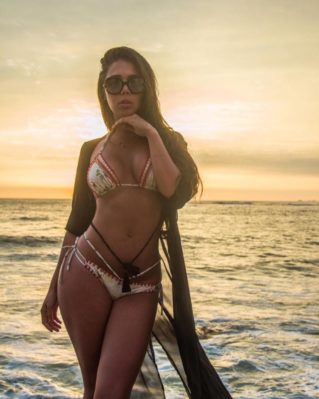 Ronaldo was playing for Real Madrid at the time, before he met current flame Georgina Rodriguez.

Mendez insists nothing “intimate” happened between the two despite the meet after the match. She added: “It was more or less three years ago.

“That summer I think he met her (Rodriguez),that could have been me.”

Meanwhile, we revealed how Ronaldo earned old club Real £540,000 with his hat-trick heroics for Juventus against Atletico Madrid.