Sheila Salta is a presenter at Urban TV. She presents an entertainment programme called ‘Back Stage Pass on Urban TV’. Showbiz Uganda tracked her down for an exclusive interview about her life and love. Read on…

SU: Tell us who is Sheila

Sheila: Sheila Salta aka Miss Salta was born in Denmark at Hividore Hospital in 1992 to Mr. Peter Saltoft and Ms Sophear Matovu. My mother is Ugandan while my father comes from Denmark. Sheila was a happy and active child always dancing and singing. While in high school at the of age 13 Sheila got an offer to work on Ugandan TV, and after her first episode, people saw her power as a public figure, now 10 years down the line many episodes, shows, parties and event she is now concentrating on filming her new series of “Hanging out with Salta” that will host several celebrities and take a look at their lives. Miss Salta had been making an appearance on stage as MC to many events like Buzz Teen Awards, Mirinda Miss Teen, Masaka Street Jam,,, Sheila is a cool and stylish girl, who is not scared of being involved with extreme activities like bike riding and water sports in Entebbe where most of her friends and click stay and hangout, she loves to party and swim in her free time, she has had interests in body art lately, she has a beautiful chest tattoo from Kla_ink, her shout outs go to Team Entebbe, Kla ink, her glamour girls and her mom who lives in Denmark and who is also her best friend. And of course her 2 year old son Liam who is there every day to put a smile on my face and give me a reason to work harder and stay at the top where I am now.

Sheila and her boyfriend Maxime

SU: How do you find TV career?

Sheila: When I moved to Uganda in 2002 for my studies, I picked an interest in a show on WBS called TEENS CLUB, I used to watch that show every Saturday. I used to tell myself that I can do better and I think it would be fun presenting so one day during my P7 vacation I told my mother am bored and I want to work, she asked me “what do you want to do?”, I said “I want to be a TV presenter on TEENS CLUB”. My mother apparently had connections and she hooked me up with an interview next couple of days. I must say I was nervous since there were other teens lining up but I decided to just be me and I nailed it. Next thing you know, I was asked to start immediately. I find TV career very competitive, you must be very informed, in style and you must have people’s attention, you must be very hardworking too. I like to be innovative, try to find something new and fresh for my viewers so I always come up with TV show ideas like Back Stage Pass on Urban TV, is a show that I am proud to have made. It’s fun though, meeting new people every day, going to places and knowing information that most people seek for or don’t know. This is the career that I chose and it ended up choosing me too.  [adrotate banner=”3″]

SU: Where do you see yourself in the next five years?

Sheila: Five years is a long time, lol, I care a lot about life, that’s why I will enjoy it every day, I love food and hanging out at the spa so opening my own hotel with a restaurant and a spa would be my dream come true, so I can drink champagne in my bubble bath every day. I believe I will be a very wonderful independent mother. 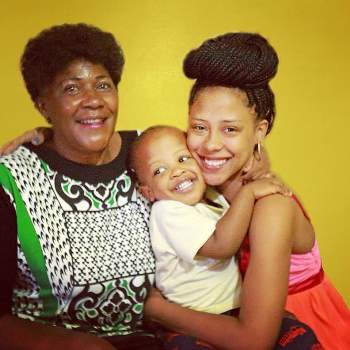 Sheila with her grandmother and her kid

SU: Tell us about your love life?

Sheila: My love life,, I have a boyfriend, Maxim, he is from Belgium, no not Maxime van Pee the motor crosser champion, although they were in the same school but he has grown up from here, he’s amazing, he is also into tattoos like me, Jose Chameleone is like an uncle to him cause Jose’s former wife was also Belgian and that is how they met when Max was young, so you might see him working with Jose a lot. He is also the tour manager of Peter Miles and has designed a few videos for him, in other words a little bit of a bad boy but I like that lol, am happy. That’s what matters.

Sheila is a mother of one

SU: What message do you have for those hoping to join television career?

Sheila: Don’t be scared of people that have more experience, don’t be scared to go ask for an interview especially when you believe you are good and you can never know you are good until you try. Be persuasive with your words and your talent. Be straight and wise and don’t forget to smile cause they are watching you;-)

Sheila showing off her trademark tattoo

‘He is the best man ever’ – Sheila