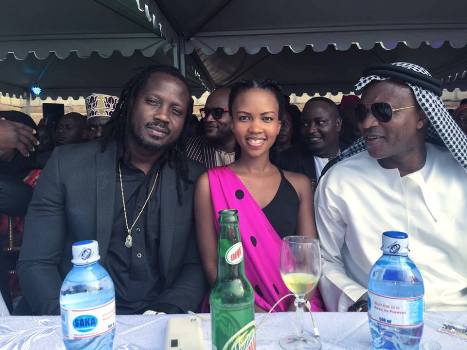 Economic and civil activist, Frank Gashumba is not happy with some of his followers after they criticised him for posing with singer Bebe Cool and some other members of the ruling party. Frank who doubles as a motivational speaker said no one is going to decide for him people to associate with. “This familiarity must stop,” he said. Below is his full statement unedited;

“This kamanyiro must stop! How can a person from Facebook and someone i have never met decide the type of people i meet and associate with.

Sometime back, singer Bebe cool held a concert at Serena Hotel where my daughter Sheilah initiated the “Kabulegana” Challenge. Some of my fans on Facebook where irked by her act saying she was promoting Bebe Cool’s song!!

True Bebe Cool supported President M7 during the 2016 presidential elections and I supported Dr. Kizza Besigye. He was also part of the team that sung ‘Tubonga Nawe’. Shortly after the rigged elections, The opposition urged to boycott each and everything the government would organise.

I know many opposition leaders and supporters who have ”Tubonga Naawe Crew” music as their ring or caller tune. Many enjoy their music in their cars and on functions like weddings and introductions but a few months back they had proposed to boycott them! Isn’t this drama?

Surprisingly though, the same opposition MPs who were telling us to boycott NRM events, they were the first to go to parliament for swearing in!! That alone, shocked immensely. The same people fought to seat on Parliamentary Committees. The Leader of Opposition (LOP) Winnie Kiiza and Cecilia Ogwal, a commissioner in Parliament were appointed as special envoys by the President to go and campaign for Dr. Specioza Kazibwe. All MPs in the Parliament both in the “Opposition” and those in NRM speak the same language when it comes to money! This shocks me!

With that in contention, I wonder if “defiance” makes sense anymore!

But that aside, for us we value friends, we have known Bebe Cool for many years.

Bebe Cool and his wife Zuena Kirema supported the Uganda- Rwanda Night that was organized by Sheila way back in 2013 by using their social platforms to organize the event and attending in person and even bought a table at the event! To us, that mattered a lot and made our bond grow even stronger.

So we are not enemies with people who supported President M7; not at all! in my case, I can’t reject any phone call from an NRM supporter or politician but rather i reject the message accompanying that call!! When will Ugandans ever develop a culture of disagreeing but share the same high table as it is in Kenya and some other African countries.

I would rather work with Bebe Cool who openly supports President M7 than work with these Political opportunists who wear blue and green during the day and yellow at night! These are politicians who want to be seen with Dr. Besigye because they think it will aid them to amass support.

I know many opposition MPs and Leaders who are on the NRM payroll!! So please no one decides the type of people i meet and associate with.

BTW I am not on Facebook to be loved but to inspire people. If you are not comfortable with what i post. Kindly unfollow me, I will not die neither you will”, he said.

EC extends Period for the Nomination of Candidates for Local Government Councils Elections, 2020

EC extends Period for the Nomination of Candidates for Local Government...