Our very own Queen of comedy Anne Kansiime beat two of Nigeria’s finest comedians Basket Mouth and Klint Da Drunk to clinch the Nollywood & African People’s Choice Award (NAFCA) in the category of Favourite Comedian. The announcement was made on Tuesday.

The gorgeous rib cracker may not have been ranked among the top 10 best comedians by the BBC like her counterparts Basket Mouth (Ranked at number two 2) and Klint (Ranked at number five) but she is now basking in the glory of her newfound title. She took to Instagram to thank her fans for the win.

THANK YOU MY NINJAS

“Just won Favourite Comedian in the NAFCA Prestigious Film and Honorary Awards. Like I always say, you my Ninjas have helped me stay on the top. Thank you for the love and confidence in me,” she posted.

The award will be presented to Kansiime on September 12th at the iconic The Orpheum Theatre Broadway, Los Angeles, and U.S.A where the 5th edition of the awards will be held.

The NAFCA awards commonly referred to as The African Oscars are US awards designed to globally promote African Cinema, stage performance and culture.

NAFCA Honors are also aimed at recognising outstanding individuals whose professional careers have been marked by extraordinary personal and professional accomplishments over a couple of years.

The 28 years old Kansiime has been doing comedy for the last 8 years and still counting, where she has had to cope up really well with the industry that has been overwhelmed with male counterparts. 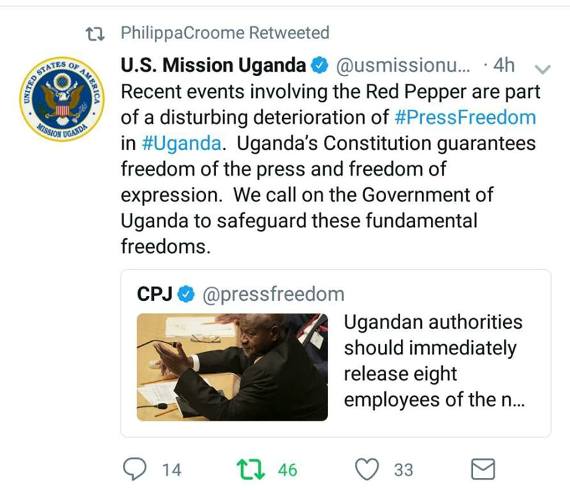 US Mission Uganda calls for the release of Red Pepper managers