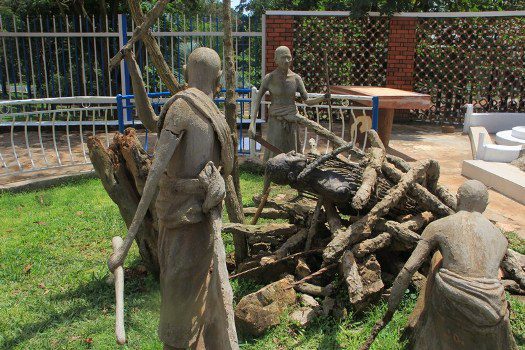 Stories have been told and retold about the world famous Uganda martyrs.

However, an upcoming movie to be premiered on May 30, at Theatre la Bonita is a story that you have not been told before. With modern cinematography, the film about the martyrs is set to write history.

The movie challenges the story you’ve been told that Kabaka Daniel Mwanga killed the converts to the new religions. The story tells you who actually did so and what was their motive.

The film starts in Buganda kingdom of 1870. The Baganda worshiped their gods called lubaale. It was a time for witch doctors such as Mama Fiinas of today, were celebs in their communities.

That’s when a witch doctor’s son asks his dad to quit sorcery. But of course he can’t. However, he was gracious enough to send his son to learn Islam, one of the new religions in the kingdom.

And when 97 Muslims are martyred, the witch doctor’s son freaks out of Islam. His dad gets him a job in palace with the Christian martyrs to be as a page.

As fate would have it, Christian Martyrs too are killed. The boy is saved again, but he is castrated. Later, the witch doctor’s son replaces the man who killed the martyrs. This is the story with background of Buganda history and heritage.

Shot in Kalangala, one of the most beautiful parts of Uganda, the martyrs’ story is a new way of telling Uganda stories.

The red carpet premier is expected to attract high profile guests, including the Speaker of EALA Parliament Hon Dan Kidega who is to be accompanied by more than 15 East African MPs, government of Uganda officials, Mengo officials as well as the clergy.

Miss tourism queens will usher in the film fans and music will be by Frank Mbalire and Sammy Kasule in their new break away band Ziwuna.

Uganda Wildlife Authority and NBS television are the main sponsors of the movie of the year and tickets will be on sale at Theatre la Bonita from 27th May.

I need a confident muscular very Rich businessman to bed, even if I am a 4th side chick- Singer Ainebintu reveals ahead of her...

I need a confident muscular very Rich businessman to bed, even...